When developing applications and projects, users should always consider functionality, reliability, and maintainability.

Keeping these aspects in mind will assist in reducing errors and production time.

The following best practices are intended as a guide for users. Adhering to these practices is not required for development. However, these principles and techniques are recommended by senior Decisions developers to contribute to efficient development.

Keep updated documentation on the intended function of the application and testing plans as development happens. Keep note of functions that are added, modified, and removed both in the Designer Element itself and in the Designer Folder.

Data must be worked by one step function before it can move on to another. Running frequent tests during development can ensure that the data being worked is always where it needs to be in the process at runtime.

Is this a purchase request system that tracks precise aspects of the request processing to comprise large-scale Reports and Dashboards? Is this an end-user healthcare system with interactive Forms that evaluate selections against Rule logic? Knowing the purpose and function of the overall build is a helpful first step in getting started on the platform.

If there are exception errors beyond understanding within the environment, please reach out to Decisions Support at support@decisions.com.

Every Designer Element has a globally unique identifier (GUID). This GUID is authoritative over the name it is given in the environment.

When two of these Decisions objects have the same GUID, the newer one will overwrite the older one. The ID of any Decisions object can be found in the right-click action menu of the object in the Decisions environment. 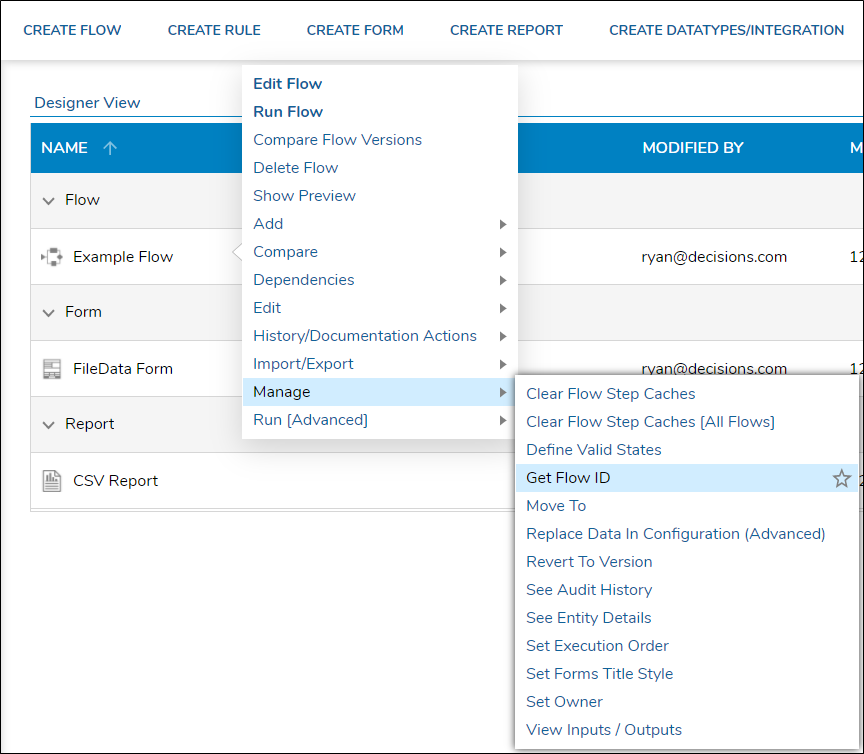 Decisions can be configured to record errors based on their log level. Log steps can be placed on custom outcome paths or after certain steps in a Flow. This practice can help with troubleshooting issues in the product, but can sometimes cause overhead if the logging is excessive. It is recommended that ERROR and FATAL level logs are reserved for process or system errors respectively. For more information on logging, see Logging Overview.

Call data structures into the Flow as early as possible so that the Change Value output mapping can be used, which will output the data from a step directly as a value of the specified structure.

Flow readability is a large consideration when designing Flow logic. The recommended Flow structure would have the steps orchestrated from left to right, top to bottom. In addition, steps should be labeled to reflect their purpose in the Flow. The steps and arrows should be connected in a way where the processing logic is in functional sequence while looking at it from the Designer view.

In the screenshot below, the Flow on the left has several steps between the Start and End steps, but it is difficult to decipher where steps interact with each other or what the process does. The Flow on the right uses the addition of step labels from left to right and top to bottom organization. This Flow is easy to read and understand, for insight on both how the process works and what the steps do.

For maintainability purposes, use as few steps as possible to build the logic and compartmentalize specific process steps into Sub Flows. When a Flow is created, it can be referenced from within other Flows by using the Run Sub Flow step. The step is populated with the values of the Flow it is sourcing, then appears as a regular step using those values with input mappings in the main Flow.

Flows limit recursions to 20,000 by default, to avoid an infinite loop that occupies all system resources. This can be changed in any Flow from within the Flow Designer, but high or unlimited recursion limits can cause performance issues. If a Flow has a recursion limit of 20,000 and it calls a Sub Flow that loops 30,000 times, this would throw an exception in the environment.

When using the ForEach step in a scenario where another list of items to iterate is fetched before a first list has completed looping, use the ForEach Break step to reset the internal counter of the ForEach step, or else it will pick up on the row number that it last received.

To iterate through a CSV with no dependencies, it is possible to forgo the “For Each Row in CSV” and do bulk processing of all rows at once using the “Run Flow for CSV” component. Large data sets (300K+ rows) have caused failures in this step.

Decisions comes with several pre-built Rules that handle common use case logic. For example, if two numbers need to be compared in a Flow, the pre-built Numbers Equal Rule would take number values as inputs and compare them against the Rule logic to determine if they are equal.

It is recommended to use a naming convention on the Rule step that describes what the Rule is evaluating, as opposed to what the Rule is. In the screenshot below, "Admin Rule" is not as descriptive to the Designer user, but "Is user an admin?" provides more context about what the Rule checks.

When integrating external services and using these Flow steps in Decisions, it is recommended that failsafe logic is configured in case the API is unreachable or an error occurs. Flows can be designed to either continue and provide "missing" data or end in a failed state acceptably.

Use Grid layouts when creating a Form so that all of the Form controls can fit easily and evenly in place. The Grid layout makes it easy to appropriately size rows and columns to create an organized interface.

Other layouts like Canvas are beneficial for their lack of placement constraints, but because of that they lack automatic structure. Vertical/Horizontal Stack is excellent when using visibility Rules and trying to consolidate space, but they are limited in additional columns or rows.

Confirm that the "Tab Order" is configured appropriately so that when a user does a "tab" keystroke, the cursor will go to the next configured control on the Form in the order intended.

When using File Upload/Download Form controls to handle files, it is recommended that the FileReference data type is used for the data, as opposed to FileData.

The use of large Forms is not a best practice because if an error occurs, troubleshooting the error can be difficult when attempting to pinpoint which Form controls is the error; a large Form may also become too complex and time-consuming when a user begins to input and output mapping. Also, large Forms may slow down performance upon saving, especially if Visibility/Validation controls are used. Users can break down large Forms into smaller Forms and call them into a sequence by using a Flow.

Data Flows should handle one Form control at a time. For example, it is not recommended to combine data return logic for two separate Form controls together into one Flow.

It is not recommended to nest objects of database stored composite types. For example, if new information is added to create an account, that new account would be an Object [Account] data type. If one Object is referenced in many locations, it is recommended that the object ID is stored in the table for all objects of the corresponding type.

With the Entity Data Structure which keeps records as visible in the Portal and Studio, the Entities should be saved outside of the project folder structure so that they are not migrated into a production environment.

For processes and applications that are intended to be used over a long period of time, it is good to prepare for this by planning the structure of the tables that will be used. For example, if data from a process needs to be stored temporarily over a six-month time period, plan to add a column in the table with a date and create a Flow to delete those old records based on the date.

In a use case where data needs to be both inserted and selectively updated, it is recommended that data is inserted first and then updated, as opposed to being inserted and updated at the same time.

For increased security with handling data, data structures that record to the database have the option to mark properties as containing Personally Identifiable Information (PII).

Data Structures are comprised of several data members that will hold values of a specified type. When the structure itself is created, all of these data members are compiled to create a new, composite data type. There are several different classifications of Data Structure that function differently based on the type of data it is created to handle.

When maintaining several data types in a project, it is recommended that the same naming convention is used for clarity. If camel casing is used, it should be consistent across all types in the project.

If a data type is created with a data member that records a DateTime value and blank dates are allowed, then the data member will need to be enabled to allow null values in the Data Structure window.

The Name Space section is used when generating the table name of the composite data type. This field defaults to the folder path where the type is being created, which is then used as the name of the table for this structure on the back-end database. Any structure created in this nested folder will appear with an extended table name in the database. This can also cause an issue if the data type were to be moved to another folder, as this does not change the table name where it is referenced.

In the screenshot below, the top window shows the Name Space pre-populated with where the new type will be located, so in the actual database table, the structure will appear as Builds.Example.DataTypes.ExampleStructure. The bottom window shows a simplified Name Space related to this structure and/or the process/application it is part of. It will appear as SampleTypes.ExampleStructure.

Set a maximum string length on data members that are expected to receive large strings of text. If this is not set, the text will be truncated to 254 characters.

Every data type that can be created in Decisions has steps created for it that perform a Get All or Get By ID action, which will either retrieve all of the objects of that type or just the object specified by ID.

An established routine method of checking in projects can make checking out a project with the latest updates much easier so that all of the dependency versions are up to date. When doing so, branching is a good way to create separate, compartmentalized sections of the repository for specific project save sessions.

When checking in changes to the repository, by default Decisions will attempt to check in all resources for that project that has been modified since the last check-in. Decisions will show a checklist of all items with changes. Select or deselect as needed before confirming the check-in. The repository also offers the ability to only check in items that have been modified by the current user.

Repository branches are used to create a copy of a project at a snapshot in time. Each branch maintains a version of all the resources of the project independently. Unlike a normal development server that does not allow two versions of the same Flow, using branches can produce this behavior on the repository.

A server can only point to one branch for a project at a time. Using branches does not allow a production server to run two versions of the same Flow at one time.