The Decisions platform offers design studios, or Designers, for Forms, Flows, Pages, Reports, Text Merges, and Rules. The Designers allow users to create and customize Decisions objects to construct an application for business needs. Most of these Designers contain a workspace where different components and settings are configured to create the design elements of a project. There are many different components and steps to choose from, so much so that there is a search bar provided to better find a specific item. The search field appears in the right panel to locate components. Examples include components to build a Flow; buttons, text boxes, and labels for building Forms and Pages; and data sources and columns for Reports. Once users add a component to the workspace, they can select it and change its properties in the Properties panel, where they can set values for the component's appearance and behavior. Depending on the designer, users may also map objects, designate input data, or select folder or report sources for components.
With the advent of Decisions 3.5, in our ongoing effort to convert the platform from Microsoft Silverlight to HTML5, the Designers have been moved to Decisions Studio. See Decisions Studio for more information on Studio.

Using the Form Designer, users can create and customize a Form to allow a user to perform an action, such as enter information, run a Flow, or request approval. Forms can also display data. 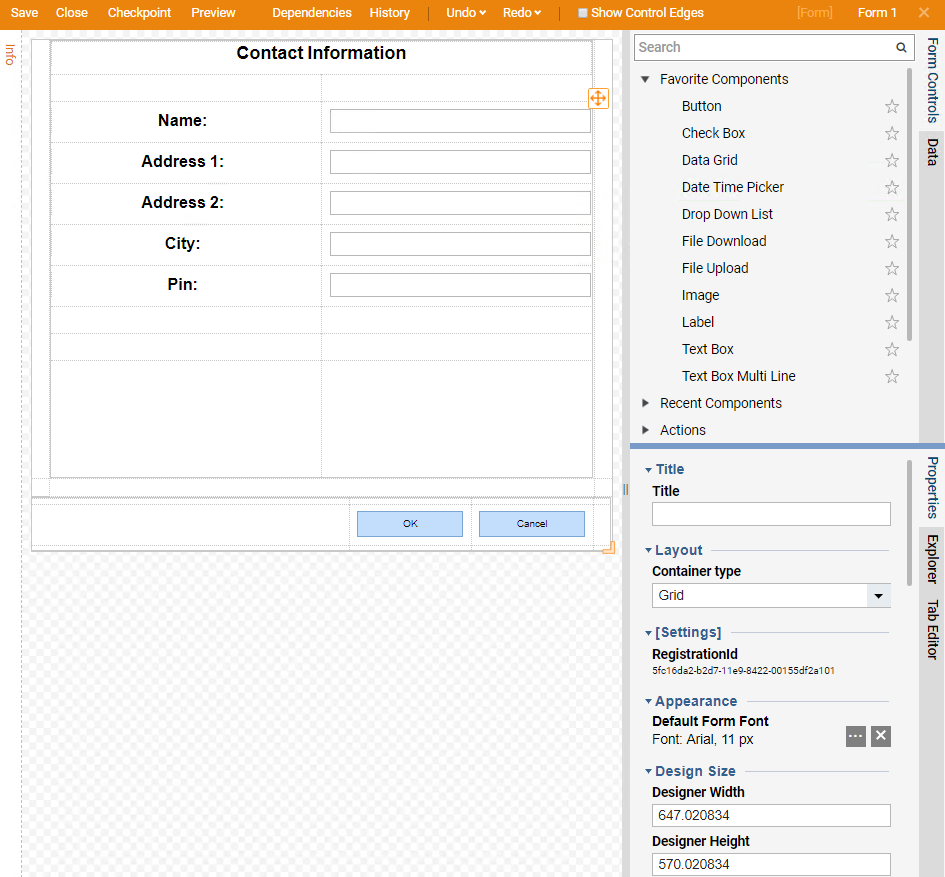 When creating a Form, users can start from scratch, base it on an existing Form, or build it from a template. The platform includes templates for Approval, Contact Details, Review and more.
In the Form Designer, the Toolbox contains all the components to build a Form. Use the search bar at the top of the Toolbox to locate a Form control. Drag it to the workspace to build the Form's layout.
Depending on the control, users can customize the Form size, appearance, and behavior. The platform offers standard controls, such as buttons and drop-down lists, as well.

To edit a control's properties, select it in the workspace, or select it from the Explorer panel at the bottom right, then view and edit it in the Properties panel.

At the top of the Form Designer, save the Form by clicking the Save Form link. 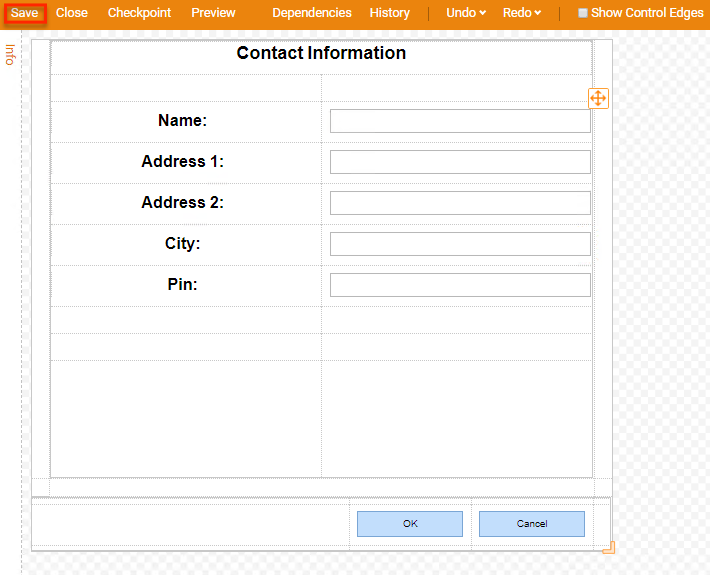 A Flow is a diagram of interconnected components that sequentially execute steps to accomplish a task. Almost all steps result in an outcome, such as true or false, and most output some type of data. Outcomes in a Flow are represented as arrows that connect components together. These outcome paths determine the direction of a Flow which can be built in the Flow Designer.
Every Flow begins with a Start Step and ends with at least one End Step. Between these two steps, Flows can be built with unlimited size and complexity, and can even be nested within one-another as sub-Flows. Many common or complex tasks have dedicated components already designed for use in a Flow, and they can be found in the Toolbox panel of the Flow Designer.

Almost all Flow components collect some kind of input data and generate output data. As Flow progress, each subsequent step has access to all of the outputs created in the steps preceding it.
To ensure maximum flexibility, all inputs and outputs can also be recreated, rebuilt, and transformed before and after the component is executed, through the use of mappings.

Using the Flow Designer, users can create Flows that span multiple systems, such as POP, IMAP, application servers, and database servers, that may or may not involve an end-user. Flows can be used for many processes, including approval processes, to check or send an email, to handle an incident, or to turn on a server.
Just as with Forms, users can create a Flow from scratch, from an existing Flow, or from a template. Templates include items such as Base Notification, Create Task and Validation.
Before building a Flow, have a good understanding of how the process should work, what systems will be used, the audience, and what the result should be. The Flow Designer shares the basic setup of some other designers, but with a key difference. The Flow Designer menu at the top of the designer includes the Debug Flow link. Use this tool to test the Flow before moving it to production. Users can also change the zoom on the Flow with the slide bar at the top-right corner of the screen. 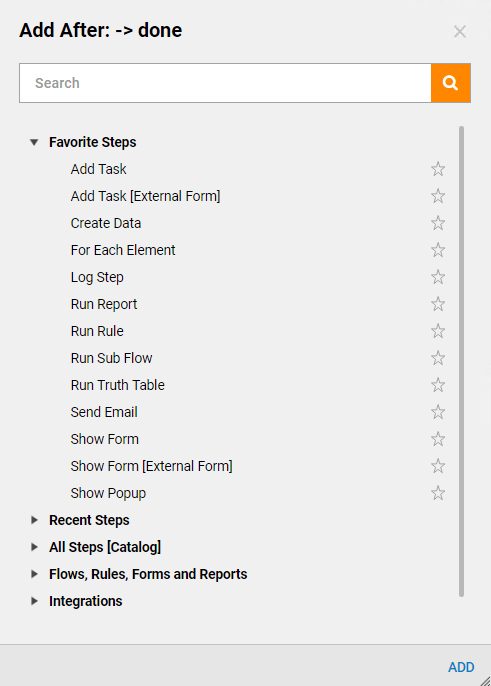 The Flow Designer also allows users to map the inputs and outputs for a step using the Mapping Editor. 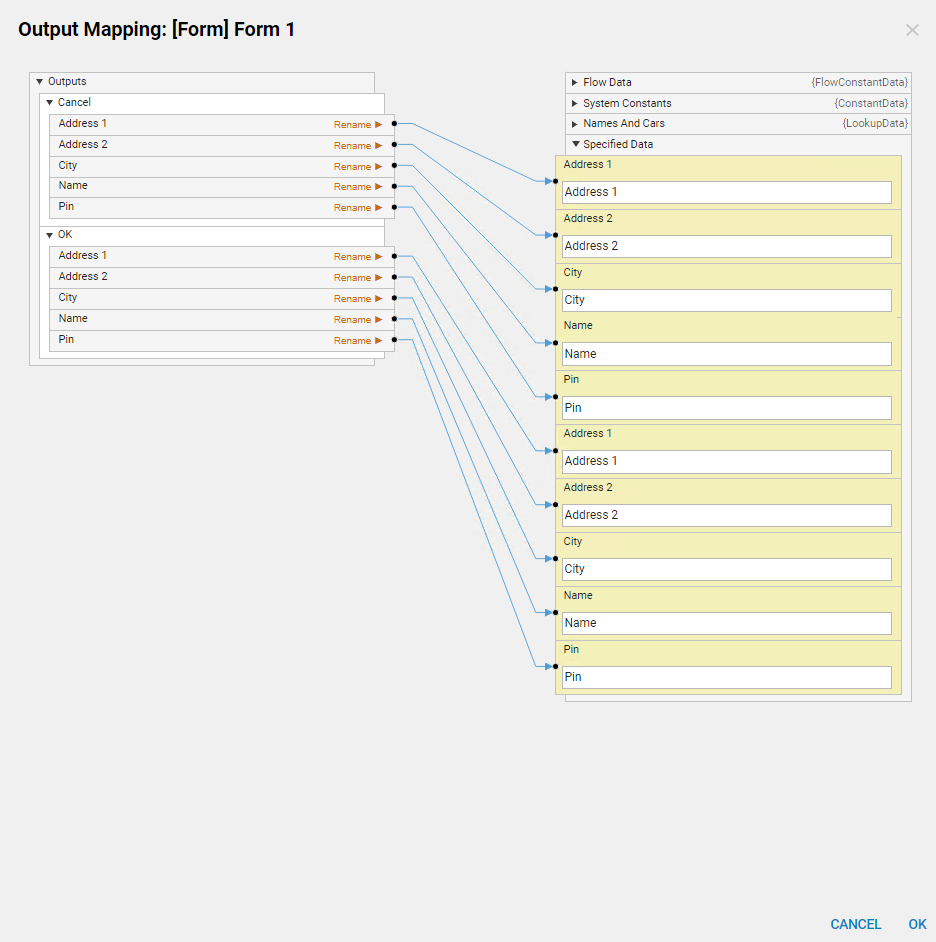 Using the Page Designer, users can create and customize portal and folder pages to provide the user with tools and information.
Again, users can create a Page from scratch, from an existing page, or from a template.
The Page Designer shares the same basic layout as the Form Designer, with a Page Elements panel, Properties panel, and Explorer panel. To alter the layout properties of a page, in the Explorer panel, select Surface, and make changes in the Properties panel. 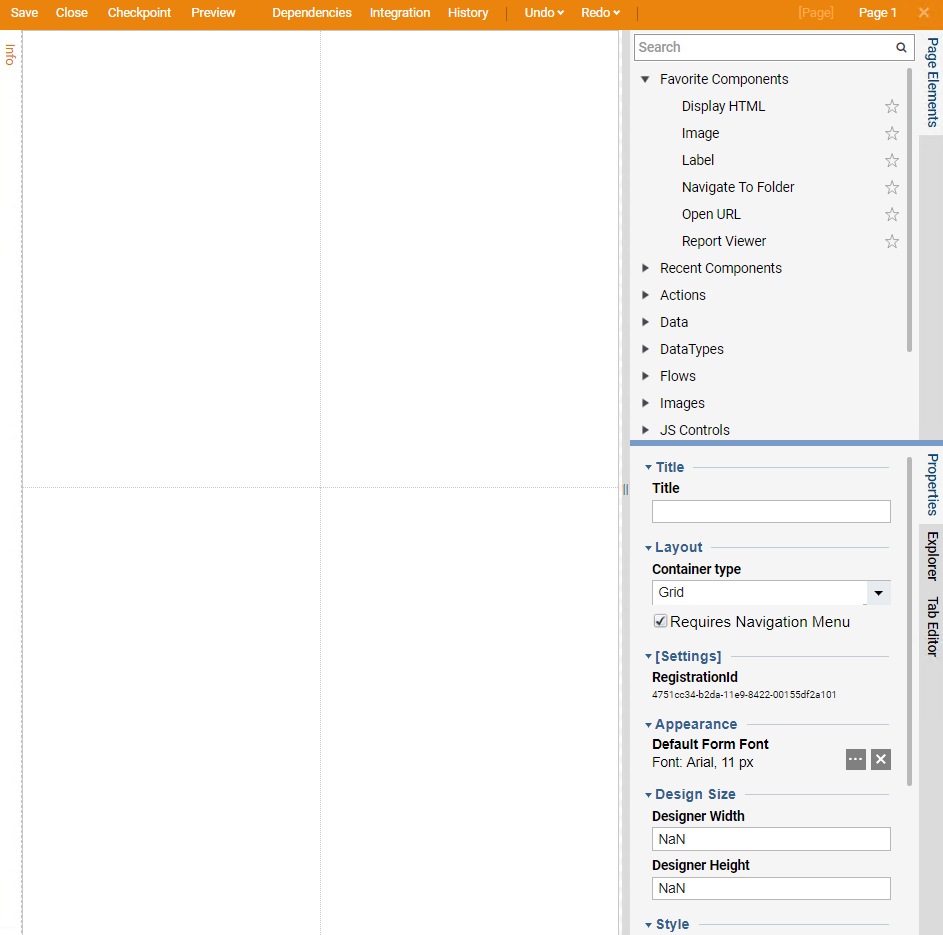 Using the Report Designer, users can create and customize reports. This designer shares the same basic layout as the other designers, but the workspace includes different sections.

To start building a report, select the Add Button in the Data Sources Field. 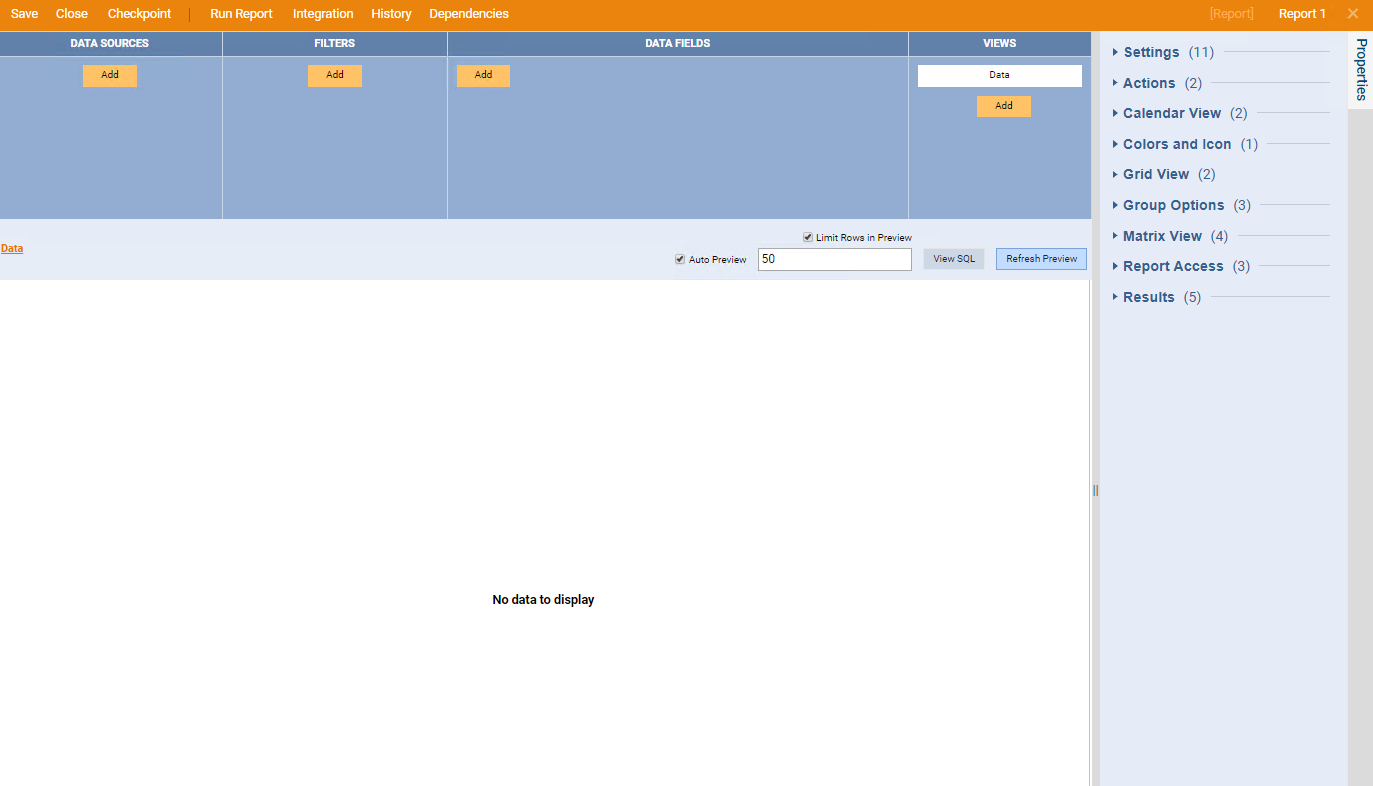 The data source determines which components, such as data elements, are available in the Properties panel.
Drag a filter to the Filters list to filter report data.
Drag the components to the Results tab to create and populate the report columns.
To further customize the report, click the arrow next to a column header and select the pencil icon to edit. Users can group report data by the column, which allows them to display the report as a chart.
Once saved, a report can be exported in HTML , .pdf or .xls formats. 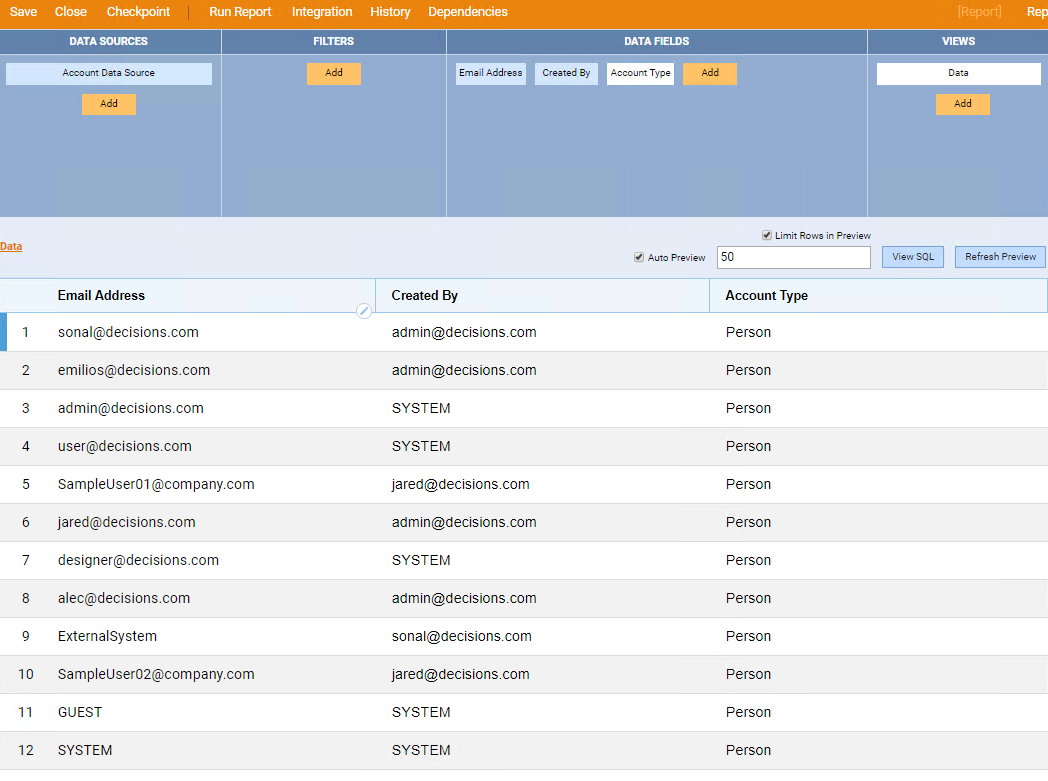 A Rule evaluates Input Data to determine whether the data matches certain conditions. The Rule returns the outcome, then passes this information to Flow, Form, or Report. This outcome may direct which path a Flow follows, or which controls display on a Form, or how certain values in a Report are formatted.
Truth Tables are Rules that compare the possible combinations of multiple inputs, allowing the user to arrive at different outcomes depending on the specific combination. A Truth Table can output a piece of data, or take action by calling a Flow.
Rules are built in the Rule Designer. Navigate to a Designer Folder and click the 'Create' Rule button, and select Create Rule to create a Rule (Create Truth Table to build a Truth Table).

In the resulting window,   name the Rule and click 'Create' to proceed to the Rule Designer. 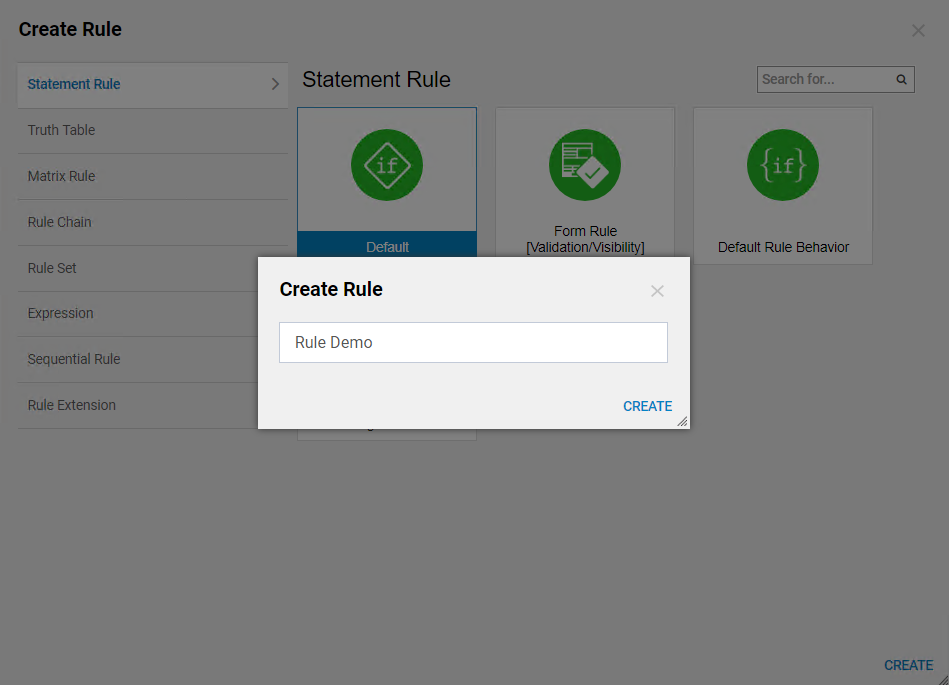 Start Rule window is presented when the Rule Designer opens. In this window, users can start building a Rule Condition.
Also, in the Rule Data section, users can Add Rule Input Data. This data can come in from the Flow where this Rule will be used. Next, this Data can be used in the Rule conditions as variables.
In the Output section, users can set up Rule Behavior Type (Default Rule Behavior, Form Rule, Rule Engine Extension) and Rule Type (Logical Rule, Data Return Rule (Single), Action Rule, Data Return Rule (Multiple)).
On the right-hand side of the Rule Designer, users can find a panel with more Rule Settings.
Here they can change the Name for our Rule if desired.
Next, in the Enabled section there are the following options:

In the Service Settings, users can Enable/Disable Calling this Rule via REST API Calls or Creating Service.
The top panel of the Rule Designer has several Utilities : 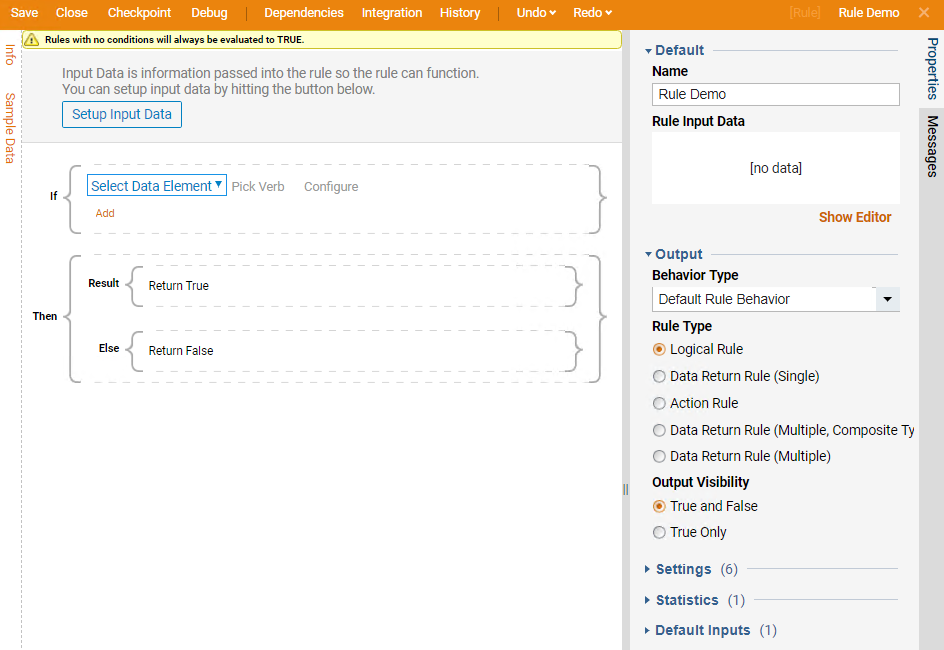 To start building a Rule, click the Select Data Element button in the workspace.
Next, in the Resulting window pick Data that will be evaluating this Rule against. In most cases, this would be Rule Input Data. Click 'Next' when Data is picked.
In the following window, pick a Verb for the condition. Based on Data type picked in the previous window this List of Verbs is subject to change. 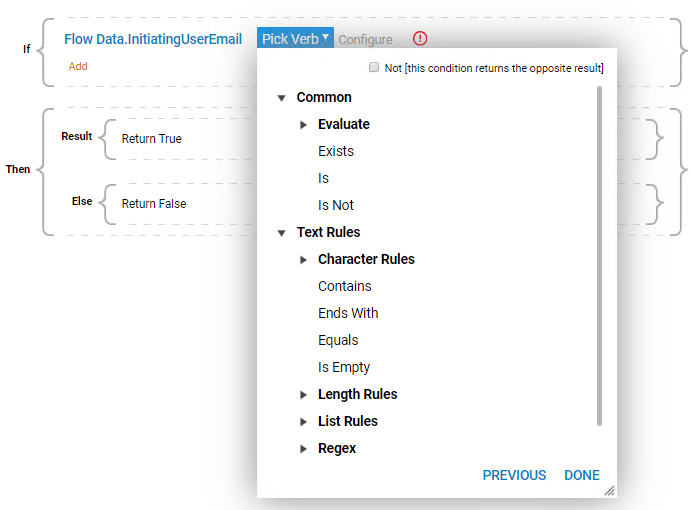 In the final window,  define the Value that Data picked in the first window is going to be evaluated against. Then, click 'Done'. 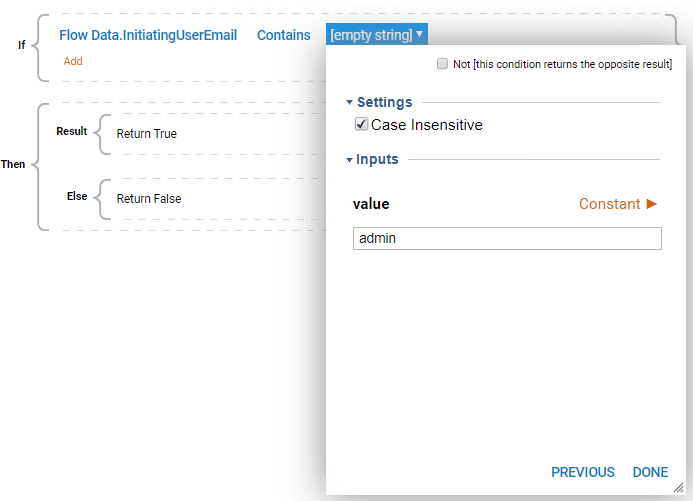 In the resulting window  there are several options: 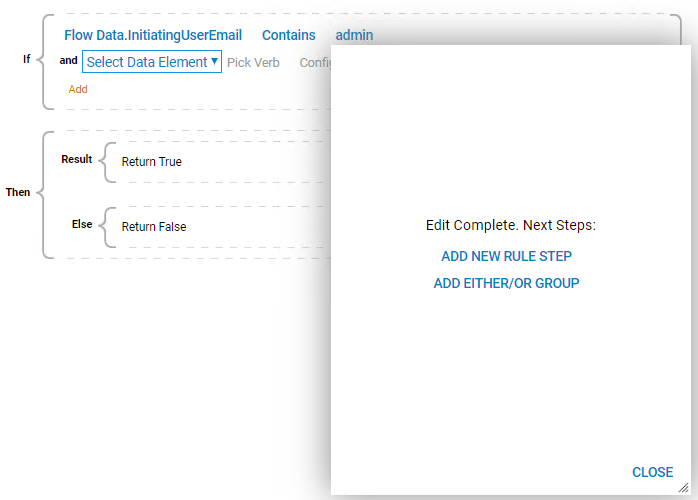 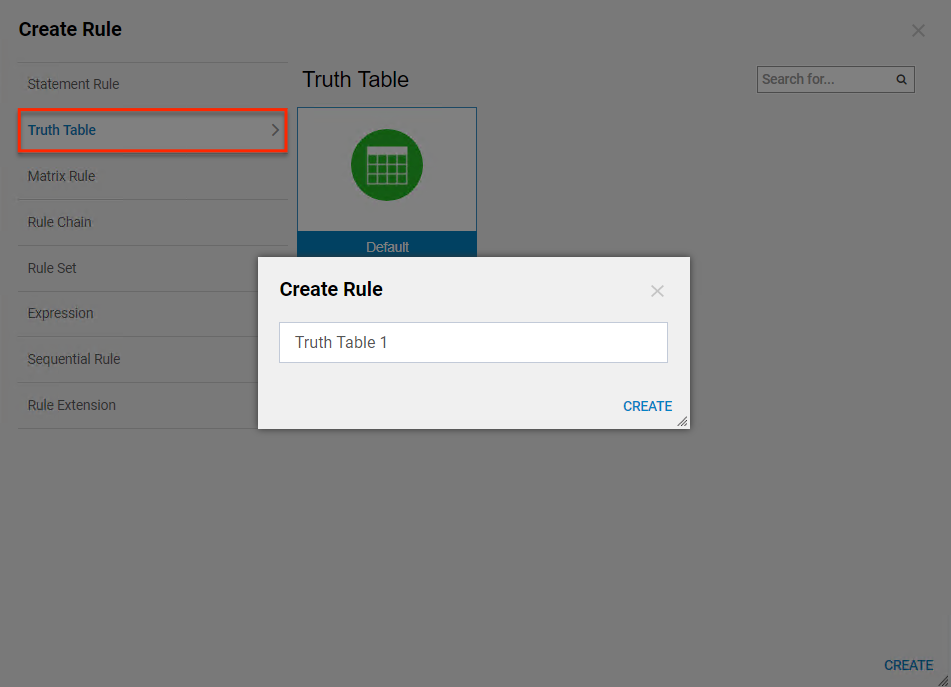 The Rule Designer is slightly different for Truth Table. On the right-hand panel, there are some additional settings like Output Type and Outcome Data (Default).
Workspace has the only one view – Truth Table View.
The Rule is represented as a Table where users can add Conditions at the top (Predicate and Verb), and then define Nouns as Rows of the Truth Table along with expected Results (Outcome Data). 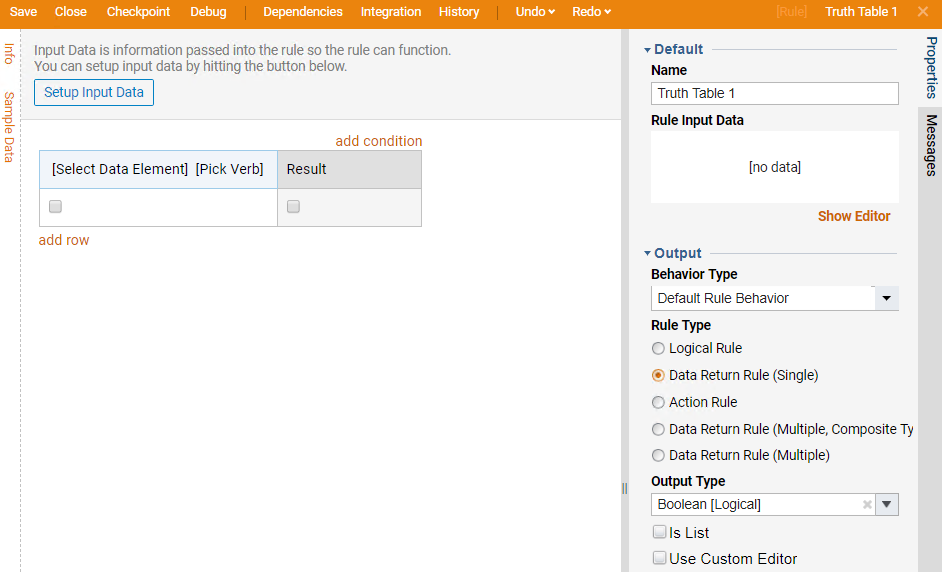 For Example, click on [no anchor data] link at the top of the Truth Table and pick InitiatingUserEmail for the Condition. 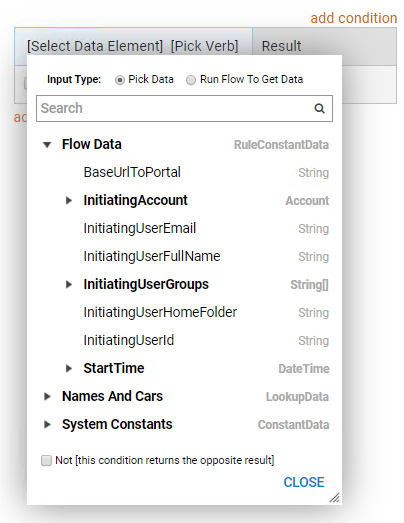 Then,  click [Pick Verb] link to pick the Verb for the Condition, for our example click Contains. 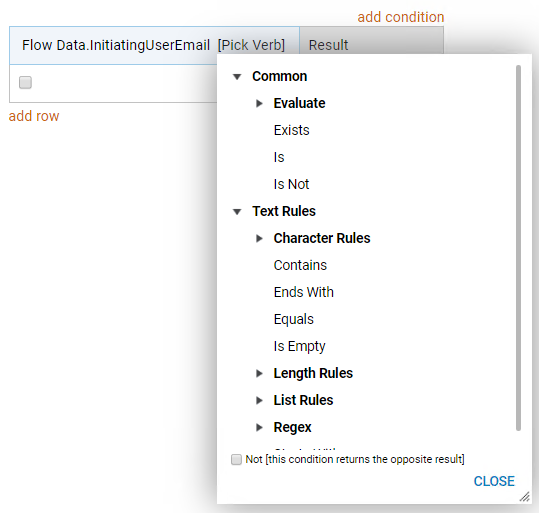 Underneath the Condition Definition (first row) define the Noun. 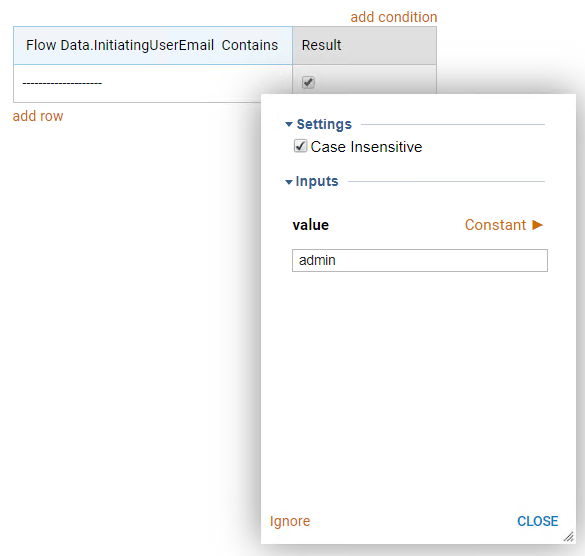 In the Result section for this Row define the expected Outcome if this condition evaluates as True. 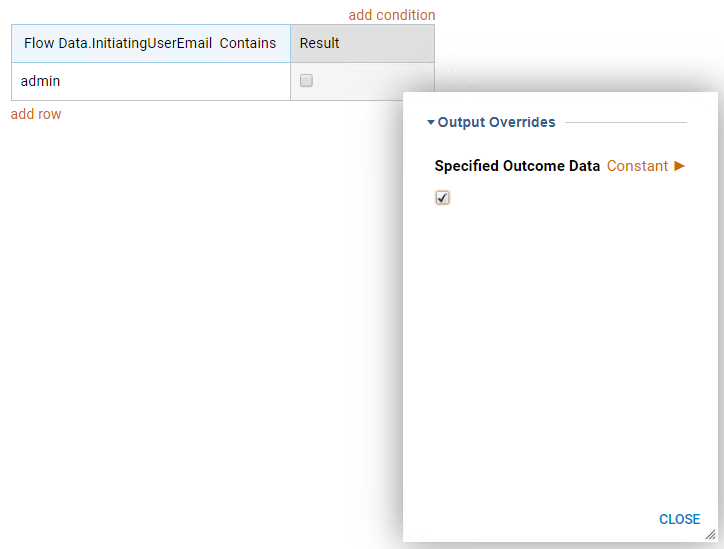