In Decisions, data moves through a Flow by passing in and out of Flow steps. Data passing into a step, or data that is used on a step before processing, is referred to as its Input data. This data is used to configure the step's Properties and defines how the Flow continues. Flow steps use those inputs to complete the intended function, then pass the manipulated data out and on to the next step. Once the data leaves a step, it is known as its Output data.

The action of applying data to step is known as mapping; in turn, the method by which data is mapped to a step is known as its Mapping Type. Depending on the Mapping Type selected, data may be defined from the step itself, or maybe broken down into its individual Properties, which then can be mapped to separately.

The following article discusses the different Mapping Types that are used to appropriately define a step's Input data.

The screenshot below shows a Flow with a single step. The Show Popup step has two input values that need to be defined; Subject and Message. Flow inputs can always be found in the properties for the corresponding step. By default, required inputs will appear with an 'Unkown' mapping type, while some optional inputs appear pre-defined or set to 'Ignore'. Selecting 'Unknown' next to one of these inputs will reveal a list with all of the available mapping types to choose from.

Outputs are set to Rename by default. Select Rename and choose the input specific for your use.

Note
Sometimes when changing an input/output type, Flow steps will display an error notification if they previously had nothing mapped. To get rid of this error, select the white space in the Flow designer after mapping the input/output. This should get rid of the error message.

Used to assign a specific value to a flow variable that does not change. Users manually enter a value once the mapping option Constant is selected. In the example below, a constant is added to a Form.

This mapping option will set that flow data variable value to the SQL Database value Null.

The Ignore mapping option sets a flow data variable to contain no value. 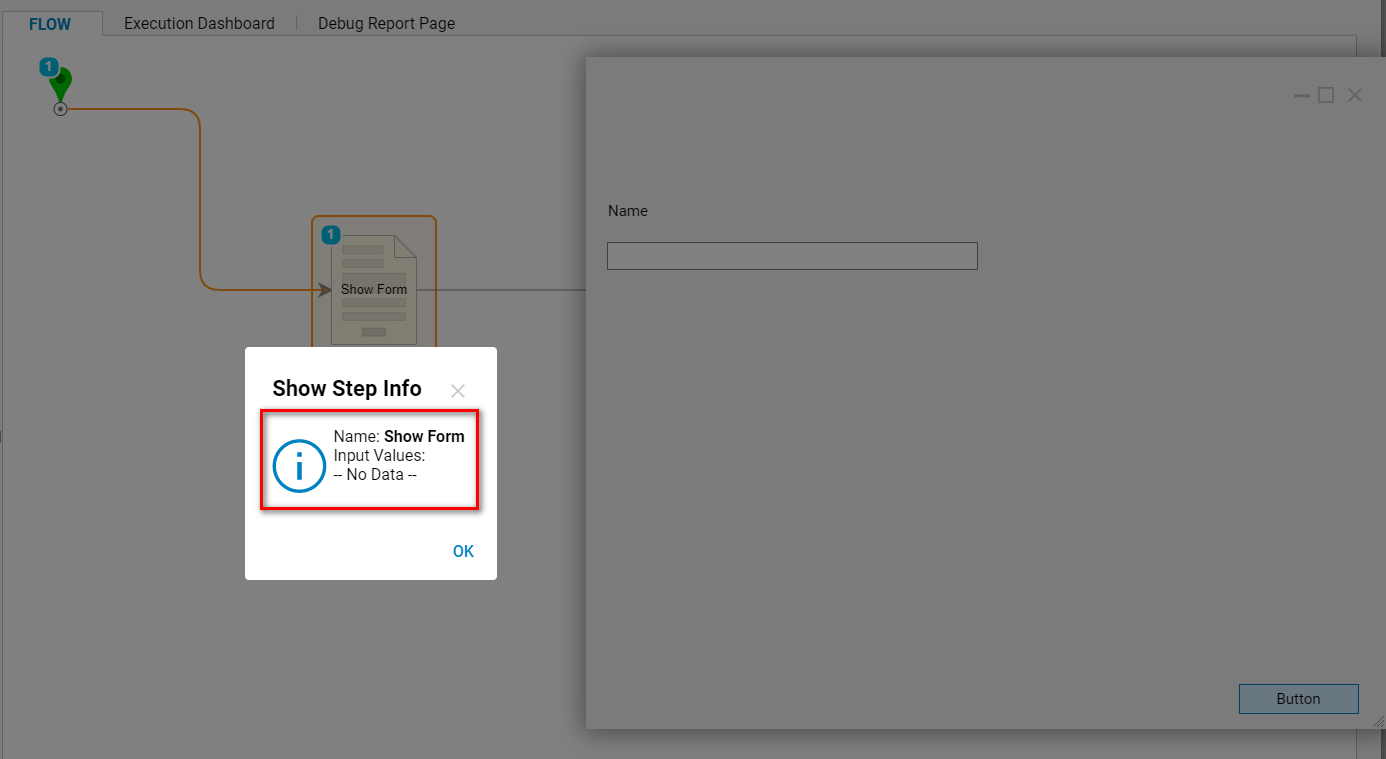 It can also create a custom converter Flow or pick one from the list of available Converter Flows that have already been created. In the example below, a Merge String List to Single String input is used. Note the separating character of '/'. The predefined input list created in the Start Step is turned into a single string with the '/' separating each name in the End Step. 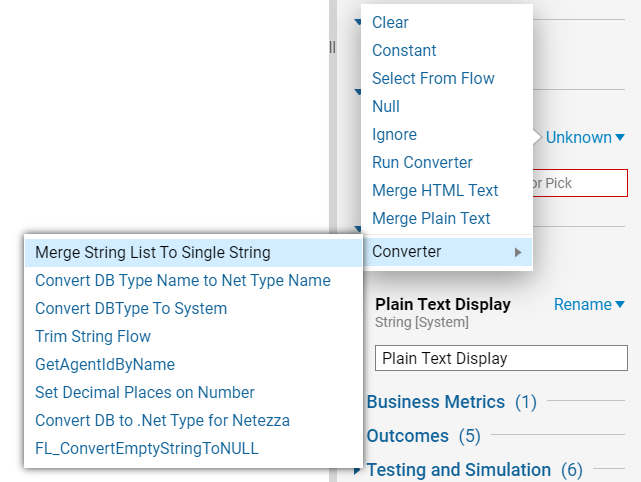 Alters the value of a previously defined data Element. In the example below the initial String created in the Start Step will be changed via a Form. In the Output, the value is mapped to the initial string from the Start Step but will now display the newly created String.

Will expose the properties of a composite data type. For example, using expose properties on an account data type will make available all of its properties.

Note on Rename
Rename is the most commonly used Output Type used. This is due largely in part to its ability to allow users to specify a unique name for the Output Data. This helps prevent any output issues that may occur should the step be renamed or altered in the future.

A Reference means that the data is not technically added to the flow data. Instead, it refers back to the step in the flow that created or fetched this data that added it to the flow. Since the flow is the parent of the data and can have multiple sub-flow, loops, or a big file that could increase server memory utilization. Using the 'reference' output option it runs the step where that data came from to make it usable. This helps the flow run easier on memory utilization. The flow will instead use more processor power.

Ignores the field and the given value in the input. Value cannot be renamed or used later on in the Flow.

This mapping option will keep the default data name and just passes that data name out. It is similar to the rename output step, except the data name cannot be renamed.

Runs predefined converter Flow that has been selected from the Converter input type (Example: Convert string to Date). Can also create a custom Converter Flow or pick one from the list of available converter type flows that have been created.| 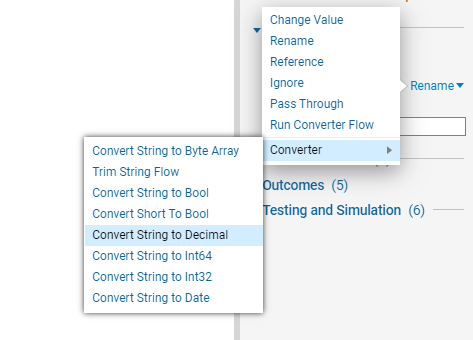 Adds characters using HTML to format. Allows the ability to apply HTML to plain text values entered in the editor. This input type allows for icons as well. This could be used to draft the body of an email for example. It also gives the option to select multiple elements from flows as well as System Constants. In the example below a Form is used to request an image using the HTML format added in 'Show Editor'. When viewing the input, the icon selected displays in HTML format. 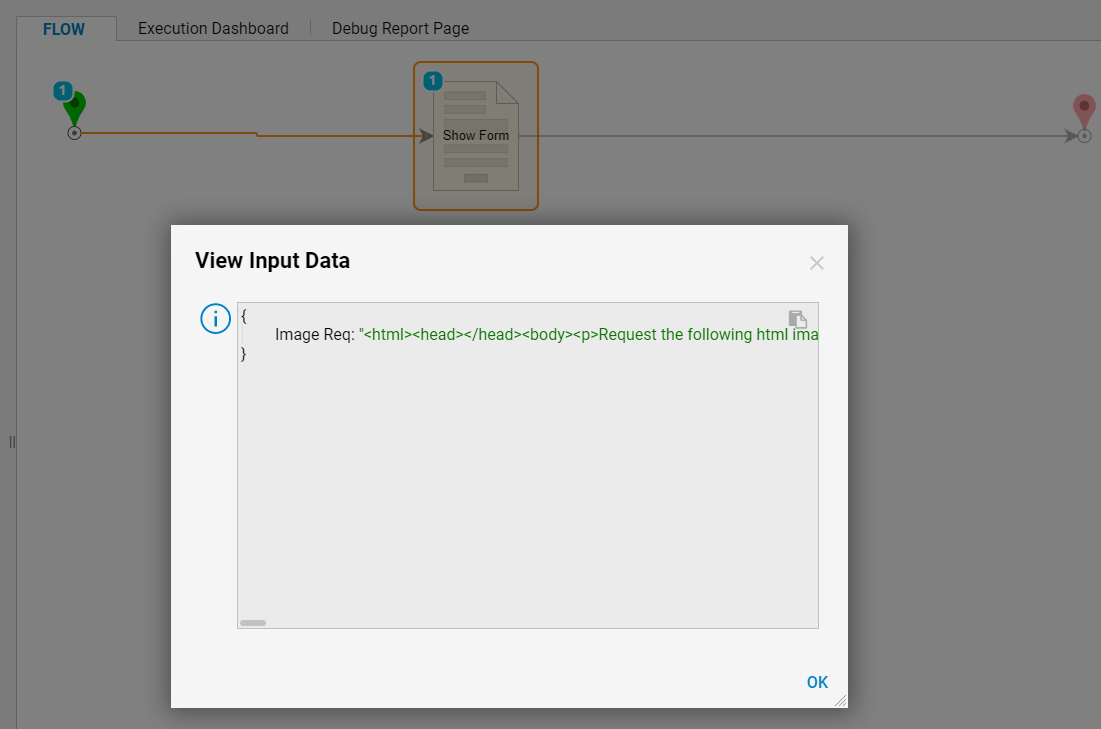 Simple merging of items into a Plain Text format. Used to create dynamic folder names and assignment names for example. Allows selection of multiple designer elements from flows as well as System Constants. In the below example a Form is used to input a name. The name is then used with the Merge Plain Text input to make a sentence that is then used in the output of another form.

Used when the date is the same throughout the process. Allows manual selection of the date. 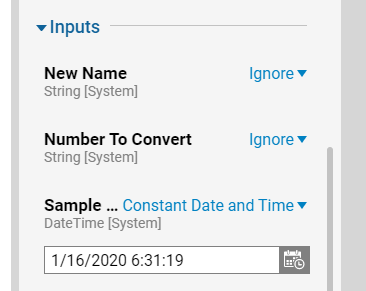 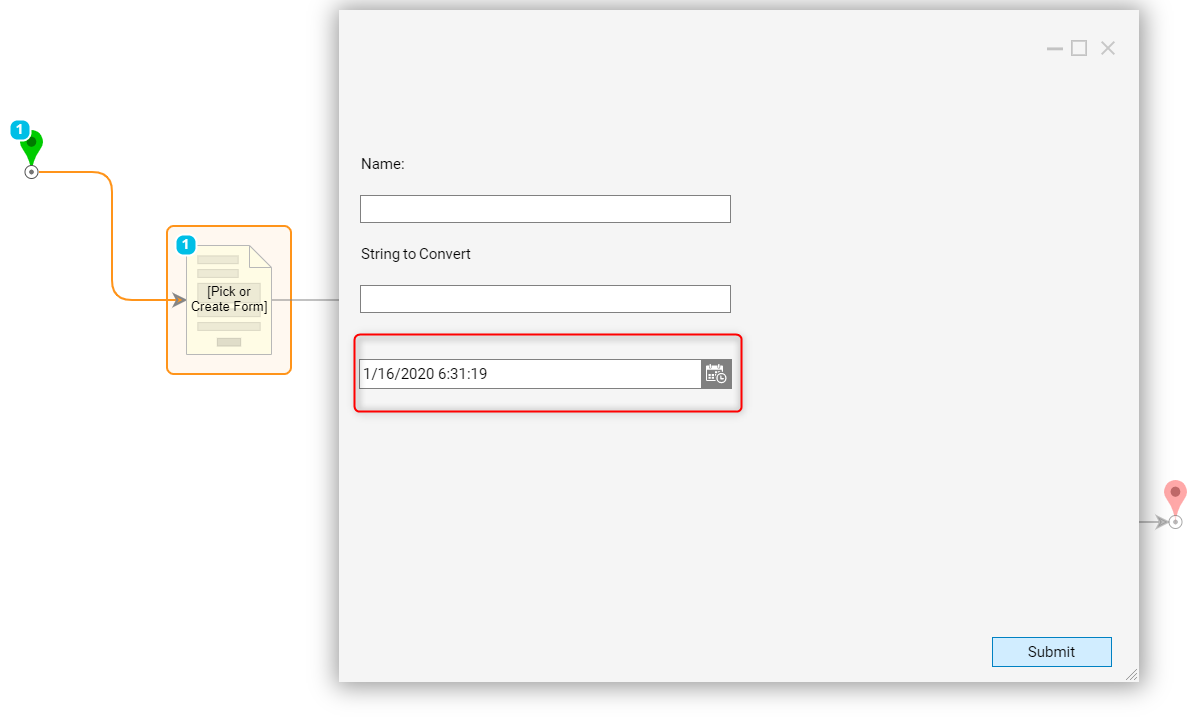 Exception
If time zone translation is turned on it will override the current system date time. For more information on time-zone translation review "Setting Up Date/Time Translation." 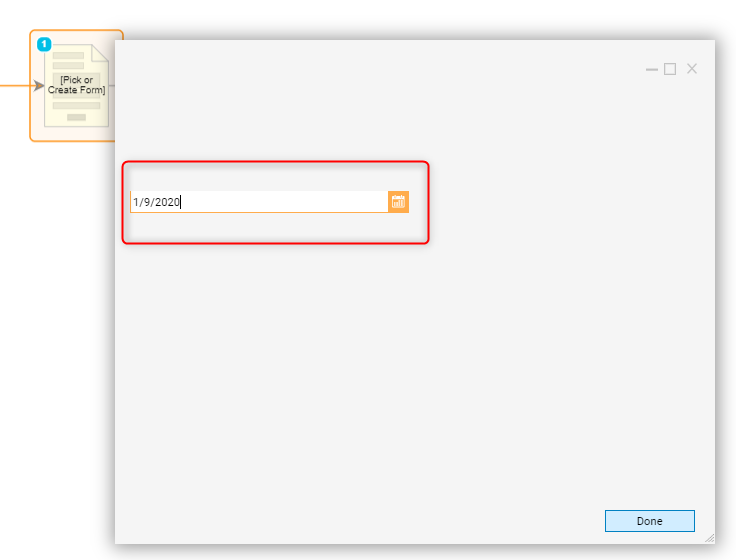 The 'Compute Date' is used to create a fixed offset for either the past or the future. This input mapping type allows the user to offset the date time down to the second or for a period of days. 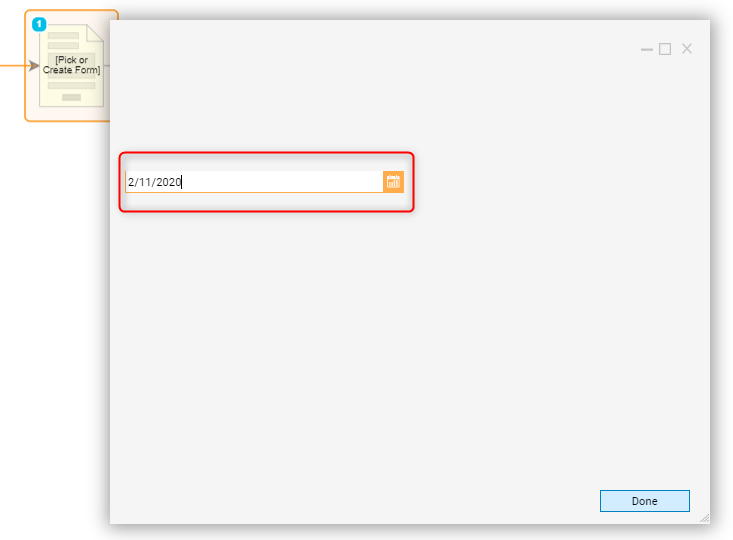 The Build Array input mapping option creates a list of a type. It also gives the user the ability to specify the 'Item' or data that will reside in that index. A frequently used flow step called the 'Send Email' step has a 'To' input. This input expects a list of strings so it can send an email to many users. Another way to configure this step is by using the 'Build Array' input mapping to pass a single email address. With that set up only one individual will get sent an email.

Will allow two separate lists to be joined as one. Similar to the Build Array step above, after clicking ‘Add’ arrays can be selected via the default input methods. In the example below, a constant array is created and will be joined with another array that was added as a flow input in the Flows Start Step. 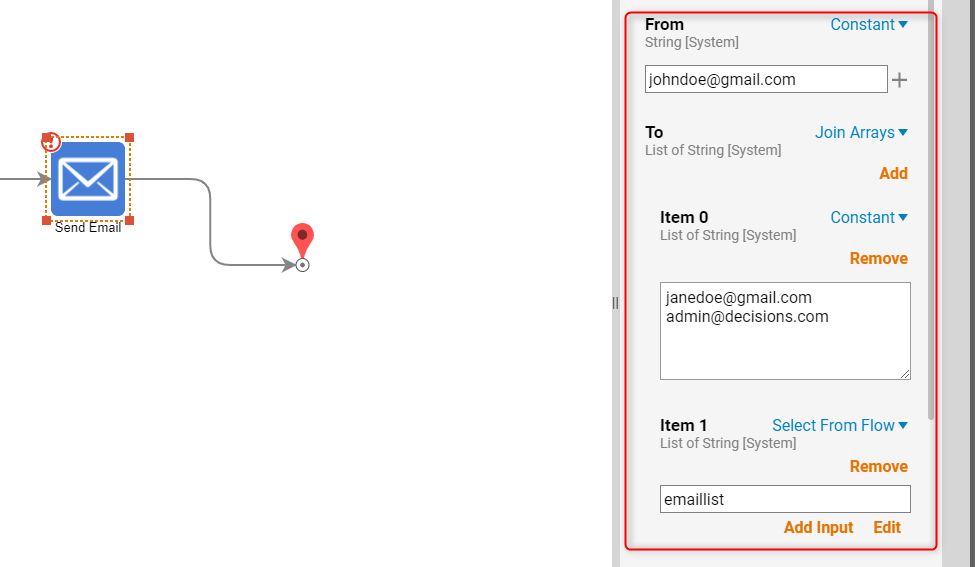