Champion Challenger is a feature available within the Run Flow step and Rule step. This feature is implemented to test how changing logic affects the results/performance of the Flow and Rules. The idea is to compare two or more strategies to promote the one that performs the best. This document discusses this feature and covers how to implement it on a Rule step.

The Champion refers to the original element being used in the process, and the Challenger is an element that has the change that a user is testing against the Champion. The Champion/Challenger Rule will have this same Input and output. However, it will have different logic built-in. Two or more competing Decisions logics may be run to provide a Decision service. This is more advantageous than typical testing or reviewing previous data results, as it runs the implementations and shows how they work in real-time. The Champion Challenger in the decision service layer will distribute requests to each of these implementations randomly. The frequency of these implementations is determined by the Challenger Percentage setting. In the case of an A/B Output challenger, this setting is determined by the user, and in the case of an Output Champion/Challenger, the frequency is an equal amount. Essentially, a champion runs, then some Decisions logic challenges the champion; in the event that a challenger performs better, it eventually becomes the champion.

In a Parent Flow, add Rule Step. Navigate to the Step tab, search the "Rule" step, and drag and drop the step into the workspace. Click the step to configure the step. From the "Selection Type" drop-down select "Champion/Challenger" option. This will require the Input for the "Challenger Type". Please see the table below for more information.

Note: Even though the following example utilizes Forms as a means of Input source for the Champion Challenger, Input may also be sourced directly through the Debugger or with Flow Behaviors.

Champion Rule checks evaluate the Amount value. For this example, it checks to see if the Amount is Greater than 100. 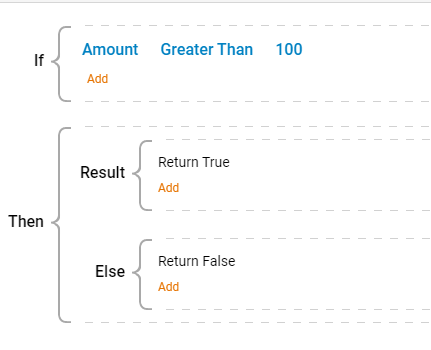 The Challenger Rule also evaluates the Amount Value and checks to see if it is Greater than 100, but the logic is different. It uses the Not operator. 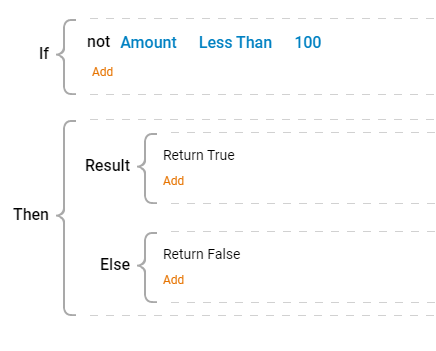 Note
A Regular Rule step will have a False and True Path. Champion Challenge Feature does not provide different paths. It contains out Variables that provide boolean data. Output Data Various based on the Challenge Type selected. Below are the various examples that can occur. 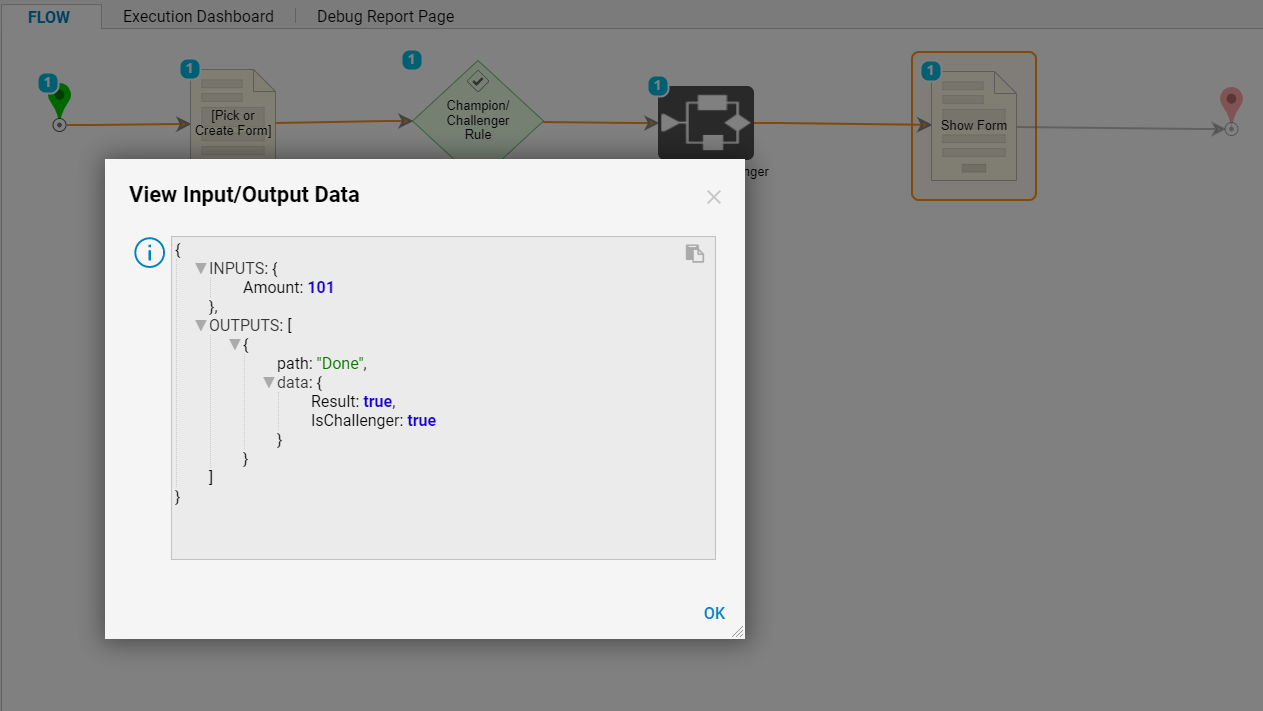 In the example below, the Champion is used, so the value is False for "Is Challenger". The Result is for the Champion Rule.

This option will run both. The Output will be provided for both Rules. Challenger Percent is not required for this selection since both Rules will be run. "Result Challenger" is the Challenger's result. "Result" is the Champion Results. 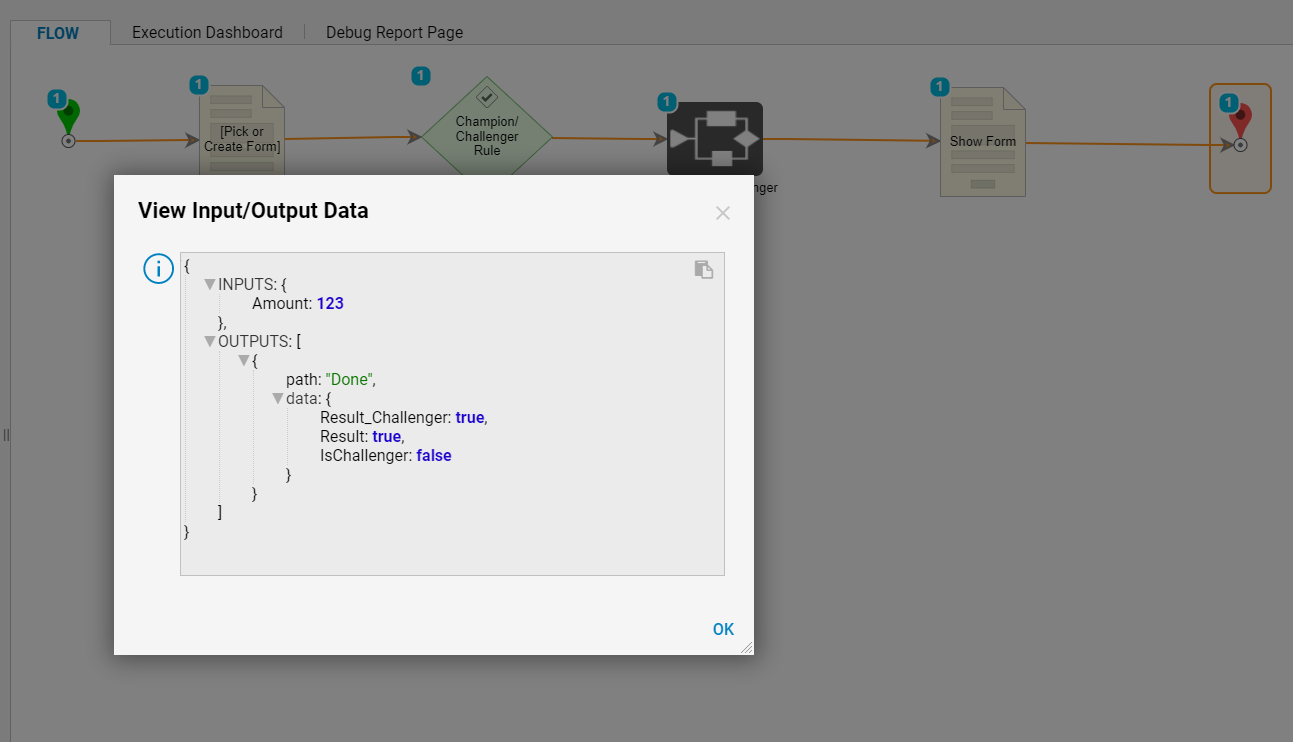 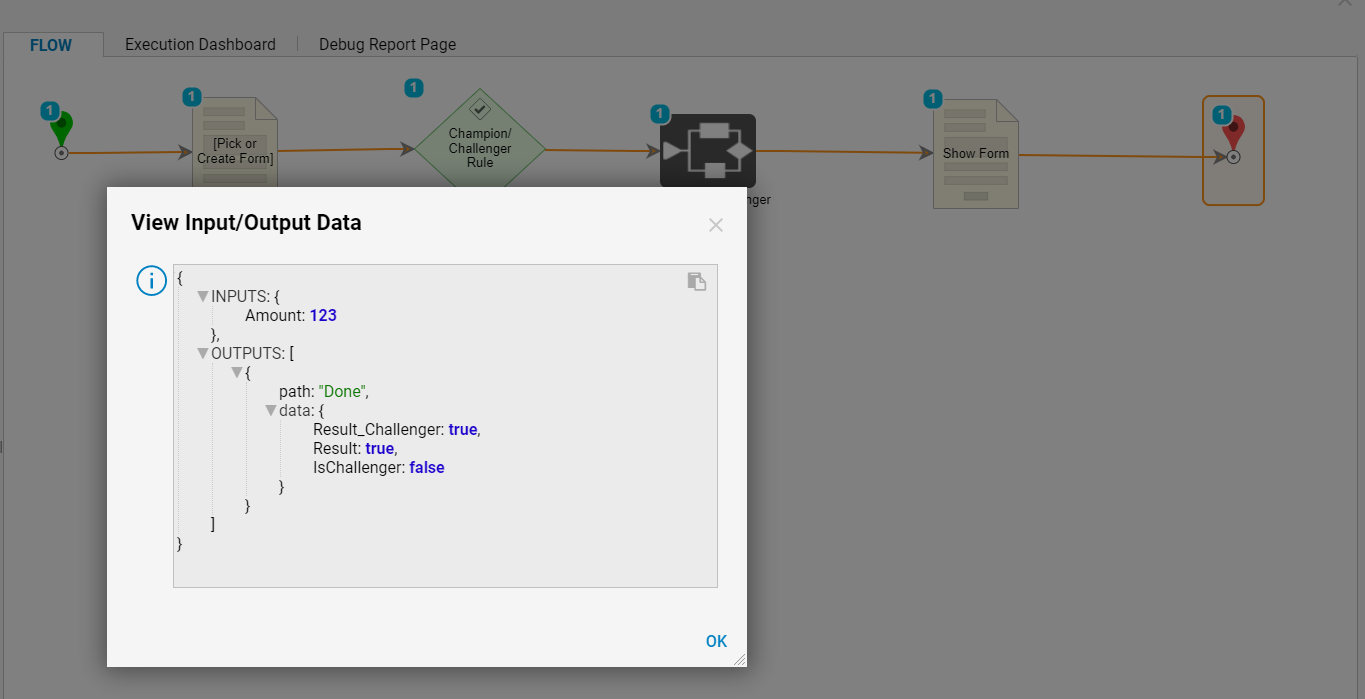 Back in the Parent Flow, the total Price and Item type are used as Inputs for the Show Form. This Form will display the Champion and Challenger Rules results as well. For the example below, the Rule step was set to "A/B" Challenger type and the Challenger Percentage set to 50. Therefore, the Show Form will have only one value displayed either for the Champion result or Challenger result.

Note
Please note to test the actual performance of a process using either the Champion or Challenger Flow/Rule, it will take multiple iterations of the process to evaluate this information. The example above is not testing the performance but demonstrating how to use the feature and to display the various Outputs.

To test the Flow, enter the Debugger via the Debug button from the top toolbar in the Flow Designer.

Run the Flow a few times to see whether the Champion or Challenger is used for each instance.

Notice that a pop-up appeared indicating that the Challenger was used.

To verify, view the Rule Input/Output in the debugger by right-clicking the step and selecting Input/Output. Notice how it states that the Challenger was not used. Therefore, the results are for the Champion Rule which was shown on the Show Form. 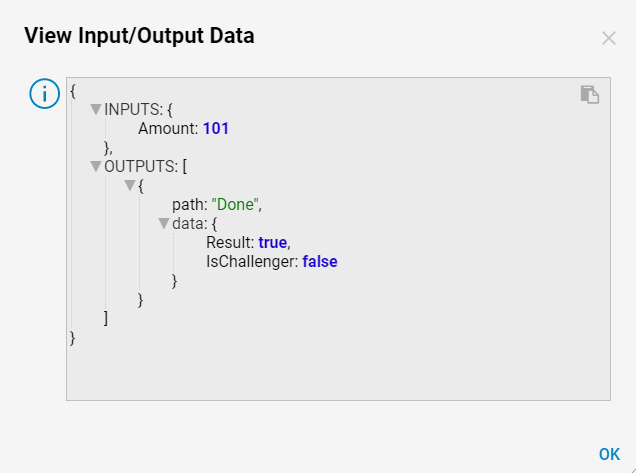