In conjunction with Grids, several Form Layout components and Rules may manipulate a Form to suit both aesthetic and functional purposes. This article intends to cover several best practices when organizing a Form with these components.

Components such as Horizontal and Vertical Stacks, Header Containers, Tab Containers, and Split Panels intuitively compartmentalize space into designated sections for a smoother end-user experience. Furthermore, Visibility Rules dynamically manipulate a Form by hiding/showing Form components based on the end user's inputs. Visibility Rules are often triggered by, but are not limited to, Boolean Data Types from components like Checkboxes, Toggle Buttons, etc.

Forms prompting multiple large groups of data from the end-user, such as an Invoice Form prompting data fields such as Personal Information, Shipping Information, Item Order Information, etc., best benefit from these components for they maintain interactional clarity for both Designer(s) as they edit the Form and end-users as they complete it.

Several Form components allow Designers to arrange information within collapsible fields. Depending on the desired orientation of the reclaimed space (horizontally or vertically), several combinations of these components may achieve this goal.

Header Containers may be collapsible by configuring the Is Collapsible option to Yes under the SETTINGS category. 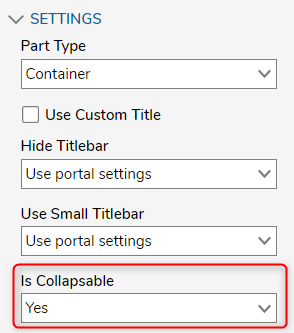 This is achieved by creating a Vertical Stack first and then filling the Stack with the Header Containers thus they are the child components.

Need a Downloadable Example?
The following Example Lab covers the use of Vertical Stacks. While Example Lab projects are resources for public use, articles and assets are not actively maintained. Screenshots and features are from the specified version. These references may become dated as new versions are released.

Visibility Active Form Flows in a Form may hide/show Form control(s) based on a designated input typically a Boolean. Users can apply the hide/show function to the parent component instead of specifying each component.

For further information on Forms, visit the Decisions Forum.
Was this article helpful?
Thank you for your feedback! Our team will get back to you
How can we improve this article?
Your feedback
Comment
Comment (Optional)
Character limit : 500
Please enter your comment
Email (Optional)
Email