A Rule evaluates input data to determine whether the data matches certain conditions. The Rule returns an outcome, choosing a path or returning data to a Flow, Form, or a Report. Set the outcome of a Rule to do any number of things:

It is recommended to not alter the default Rules as they are used throughout Decisions. If they are edited it could lead to many things breaking.

When To Use Each Type of Rule

Truth Tables are rules that compare the possible combinations of multiple inputs for a single set of data. This allows the user to arrive at different outcomes depending on the specific combination. A truth table can output a piece or pieces of data, or take action by calling a flow. This Rule is represented as a table where conditions can be added at the top (Predicate and Verb), and nouns are defined as rows of the Truth Table along with expected Results (Outcome Data). Truth Tables can be configured to return more than one outcome. This is helpful when there is a single set of data that a developer may want to be analyzed in more than one way. To learn more, see About Truth Tables.

Rule chains are a set of rules combined in sequence, where every Rule produces a fact that is both an output of the rule chain and can be consumed in Rules farther down the chain. Rule chains are useful because it allows the user to connect a series of rules that could be made up of any one of the Decisions Rule types, and define it as one Rule. To learn more, see Rule Chains.

A Matrix Rule is a rule that can be made up of many different rows and columns.  A Matrix Rule is used to evaluate data with customizable settings to each specific row or column. Each row and column can have particular parameters, and these rule evaluations can be nested within each row or column. When a Matrix Rule runs, it has an outcome result, each outcome from a horizontal column creates a column for the Matrix, and each outcome from the vertical row creates a row for the Matrix. For more information, see About Matrix Rules.

Rule Sets are common sets of rules and flows that can be parameterized or customized based on context without the need to copy or rewrite them. A Rule Set allows designers to define a number of Rules or Flows that can work together. These represent the process to follow that will be known as the base set. See Setting Up Rule Set for more information.

By utilizing the Rule Audit and Rule Phrase Audit Database Tables, users may view the history of a Rule that has the Capture Audit History Property enabled. Users may interact with these tables via Database Integration or by using them as a Report Data Source.

The Rule Audit table displays information on the Rule that pertains to the Result of the Rule, including the Rule Name, its Audit Name, the Result Data, its Audit Id, and its Entity Folder Id.

The Rule Audit Phrase History table more so deals with the data values used within a Rule such as its Anchor Variables and the Phrase Rule (text) used within the Rule. 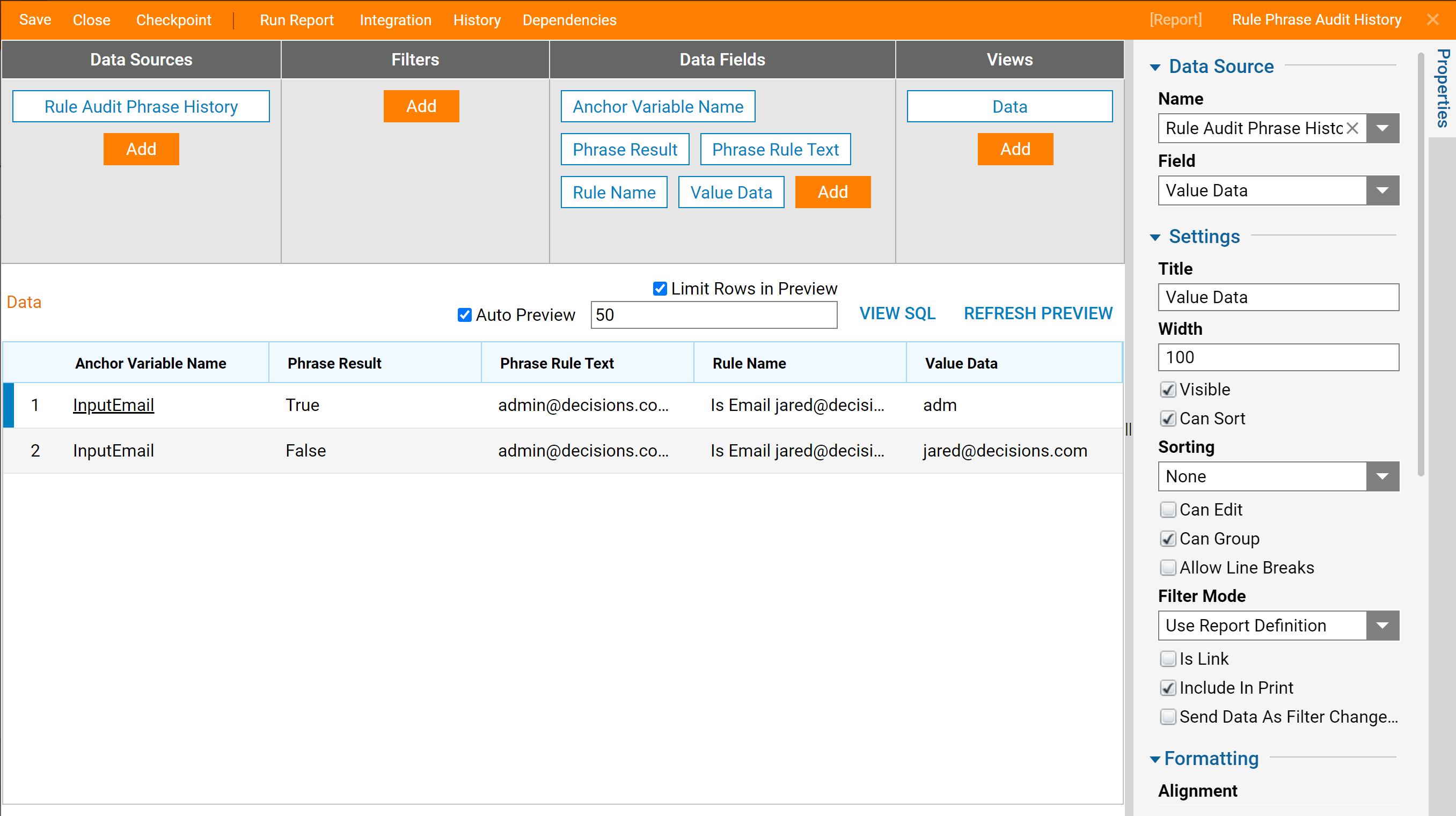